Blockchain has a bright future in banking

As I explained in my last post, a global network is a critical success factor in blockchain adoption, and arguably the biggest one. But there are others. In this final post, I will discuss some of these factors and take a look ahead.

In addition to the network, generating internal momentum for blockchain integration and implementation will be essential for the wide-scale adoption of blockchain technology in the financial services industry.

Unfortunately, half of the banks we surveyed report struggling to do so. According to the participating executives, kick-starting blockchain initiatives will require addressing key regulatory and compliance issues—the two biggest factors executives said contribute to internal resistance to blockchain. Based on our findings, security is another reason banks could be hesitant to embrace blockchain, and understandably so.

Reasons for internal resistance to blockchain. 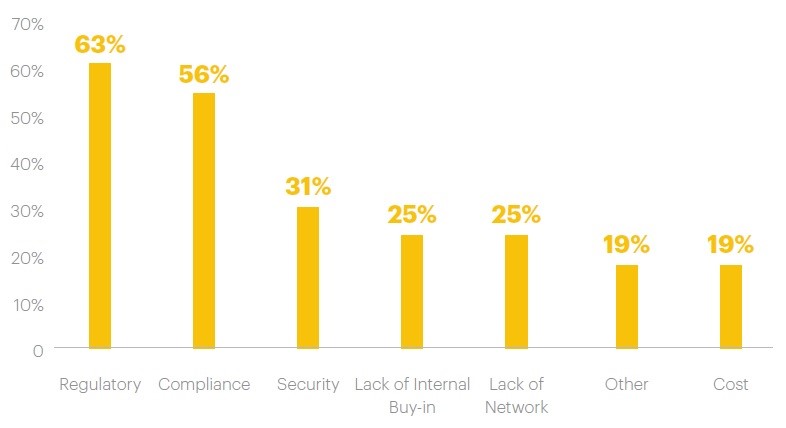 The need to educate key stakeholders within the organization on blockchain’s enormous potential benefits and positive impacts was another factor, and banks are pursuing a variety of approaches to educating their employees about blockchain. The majority (77 percent) are using internal experts, but nearly the same percentage (73 percent) are relying on outside consultants.

Both types of experts often are used to inform the efforts of special teams that banks have formed to explore blockchain possibilities.

Finally, executives said actually applying blockchain successfully to payments will require fostering an uncommon coordination among banks—which is vital to generating the positive network effects that make blockchain so compelling. Another key is developing the appropriate legal and regulatory frameworks.

In spite of the factors that are currently limiting adoption, the future looks bright for blockchain and distributed ledgers. As real-time, open-source and trusted platforms that securely transmit data and value, they can help banks not only reduce the cost of processing payments, but also create new products and services that can generate important new revenue streams.

There is substantial value waiting to be unlocked.

In a recent Accenture study, we conducted an analysis using real ledger data of eight of the world’s largest investment banks mapped against our proprietary Accenture High Performance Investment Bank model. The study aimed to uncover how and where blockchain could cut costs and deliver savings of more than 30 percent across the middle and back office.

Our results indicate that a blockchain-based database system could reduce costs and:

By assessing the progress of the technology, strategies to reduce resistance to adoption can be developed. We can address many of the apprehensions we discovered in our research, and help organizations right-size projects and determine a path forward to explore the technology as it moves toward broader adoption.

Banks need to look at the bigger picture and work together—and with non-banks—to help define the backbone that can underpin a universally accepted, ubiquitous global payment system than can transform how banks execute transactions.

With the right framework in place, banks and other financial services institutions will be well positioned to reap blockchain’s significant business and cost advantages.

To learn more, take a look at the Blockchain Technology: How Banks are Building a Real-Time Global Payment Network report. I also invite you to read the Banking on Blockchain: A Value Analysis for Investment Banks.

Blockchain for banks: it’s all about the network

Blockchain is top of mind for banks

Next Post - Bridging the David and Goliath cultural divide